On February 22 we had to say farewell to our good friend and band member Behsat.

Besides being a great musician, amazing multi instrumentalist, tremendous vocalist and many more, he was also a fighter. An illness that takes mostly a short period to take over, couldn’t get a grip on him for three years. He was not giving up until the last moment. In the whole last period he would still be going with us on tour or playing concerts, in between the chemotherapy. His determination had no borders. Believe me, he was playing better than ever, knowing that his life and strength would depend on it.

Apart from his knowledge about music, energetic Behsat would give people hope and believe.  We were lucky that he believed also in our music and us. He would constantly keep the spirit up and throw in positive energy.  It was amazing to experience that.  We will miss that too.

It was an honour that he chose to celebrate his 52nd birthday with us in Bogota/Colombia. We cooked some terrible pasta with ketchup instead of tomatoes that we bought by mistake and drank some wine from a local store.

A moment never to forget. For the rest we would rock the stage over there, for a couple of nights in a row!

It is still difficult for us that Behsat will no longer join us on tour and play another concert. We still cannot believe and don’t fully accept the fact that he is no longer here.

Thank you for being with us all this time!

Despite your recordings for the new album Mecka Bela, you will not be able to share our joy on stage with us in person. But I have some news for you my friend: we will take your killing grooves with us……….so……..see you on stage, buddy! 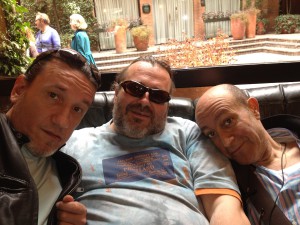